Still with the diary entries from 2007, and 19th May 2007 was a really interesting one because the sensation it describes of numbness and detachment is probably the most significant aspect of ED for me, and it’s the part I really genuinely still miss. 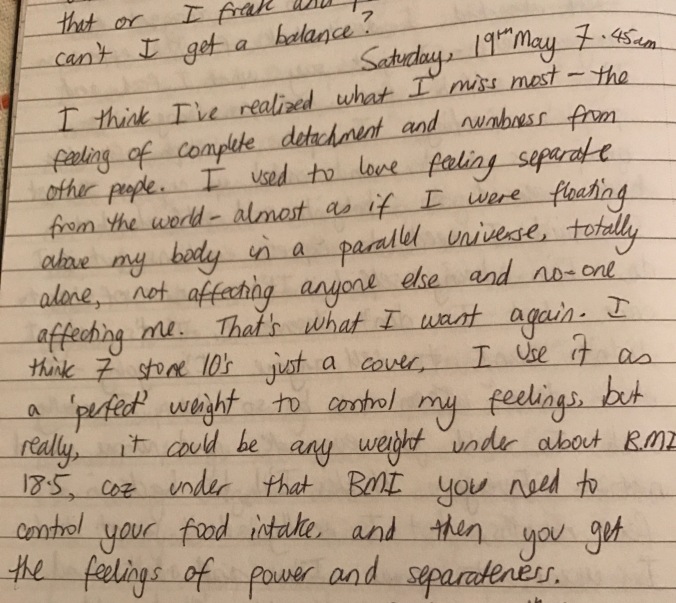 It’s weird reading the way I’ve described it though- the “floating above my body in a parallel universe” is EXACTLY how I remember it, and it felt ‘safe’ and ‘slowed down’ somehow.  It’s different to ‘zoning out’-type dissociation (where you go slightly out of your body and out of sync with time, usually because of anxiety or being overwhelmed) because it’s more subtle and pretty much constant.  The part I liked most was that your emotions ‘switch off’, even obsessive feelings and urges which at that time felt like magic and it really was the only way to escape and to survive.

The part that really surprises me is that I’ve linked controlling food intake with “feelings of power and separateness”, almost like it’s the control of food that gives the detachment rather than the low weight which is what I’ve always (consciously) thought.  I don’t remember writing that and I can’t think why I did.  I hate the idea of ‘ED’ as something separate to you (feels like a scapegoat which makes me feel even more guilty) but it really does read like that came from something ‘other’ than my thoughts.  So weird to read.

The other part that I can remember really vividly is not wanting to affect or be affected by people, and that was the main reason I wanted to discharge.  I’d linked it to the feelings of detachment (because if you’re detached, you can’t be affected) but I was also aware that since detachment was linked to low weight and eating less, that would automatically affect other people so there wasn’t really a way out.  I was feeling so so trapped by then, but also calmer because I knew I’d be leaving in a couple of days once my weight was enough to discharge without risking a section.