Hi guys, I’m really sorry I haven’t written a blog post in so long; haven’t been feeling great recently and getting really frustrated with (lack of) mental health support, and I don’t like posting non-positive writing so thought it would be best to give blogging a break for a while.  Also haven’t been running much recently since I cracked a rib a couple of months ago but FINALLY getting back into it and ran two awesome Saxons Vikings and Normans events last weekend which were, as usual, amazing, well organised and massively supportive.  Thanks Traviss, Rachel, Karen and everyone else who helped to organise and run the events!

I was really nervous about running the events because I hadn’t run properly in over two months and I tried to run an ultra event a couple of weeks ago but only managed 16 miles due to rib pain and cold weather, and I drove down to Kent half-expecting this weekend to be similar.  I’d had a busy week at work and was exhausted before I even got there but when I arrived in Deal and went to the B+B (which I’d booked because it was the cheapest), I was mega excited to find out that it was on the seafront!  The sunrise walk before the runs and moonlight afterwards made the trip to Kent worth it even if the running didn’t work out at all, and I was looking forward to seeing friends from other runs who were also taking part so I started to feel a bit more optimistic although still very, very nervous. 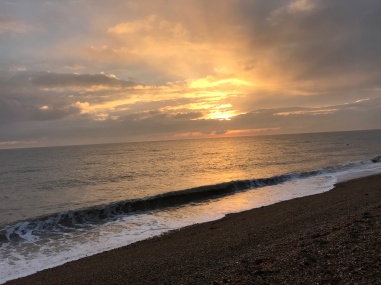 Saturday was the Betteshanger Challenge and I kept reminding myself that some (crazy) people were doing 10 marathons in 10 days and this would be their 9th so I didn’t really have anything to complain about!  I still wasn’t sure if I should aim for a marathon or ultra so I channelled my inner teen and asked the collective wisdom that is Instagram via an insta poll and the results came back as 70% ultra.  So that pretty much decided that!

One of the things I love most about SVN events is how friendly, accepting and welcoming the people are.  It’s amazing when people not only recognise you but also seem happy to see you, and it’s like you only ran with them last week instead of months ago.  And everyone is so inclusive that even though I’d one of the slowest runners on the planet, it really doesn’t feel like it and everyone is equal even though there are people there with crazy records!

When the run started it was FREEZING and I ran the first lap wearing pretty much the amount of layers you’d wear on a ski slope.  It warmed up *slightly* by the second and third laps though so I swapped my ski jacket for a lighter windproof running one and took off one of the pairs of gloves, still cold but definitely better than running like I was doing some sort of polar marathon. 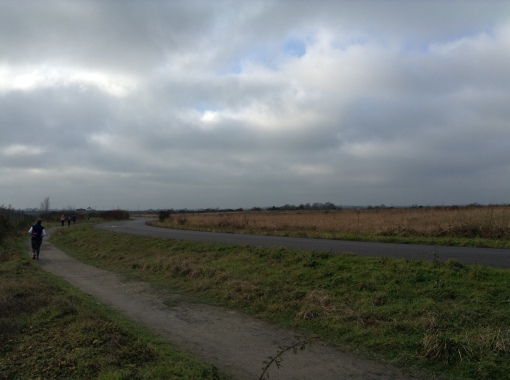 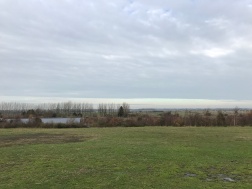 The course wasn’t the most exciting in the world; it started up a hill past the visitor centre then followed a two mile cycle track and back to the start which was a bit monotonous after a while but at least you couldn’t get lost and the views weren’t terrible.  It was also really, really cold (although I was told it was much colder during the week) and my temperature regulation is a bit rubbish so I was really feeling it as the race went on.  I couldn’t seem to get into the usual rhythm but managed to settle into a relatively OK state of half-jogging and brain slowedness if not totally quiet, which seemed about as much as I could hope for.  So I carried on longer than I thought I’d be able to and started to connect more with the run as the time went on.

Part of the reason I didn’t quit at half marathon (which I seriously considered) was that I was fortunate enough to run into the awesome and inspiring Nick Nicholson who I’ve run with before on previous races and who never fails to amaze me with his pretty much constant running and amazing world records.  I’d been feeling a bit demoralised and exhausted but Nick put up with several laps of me talking pretty much random crap at him (until once again, I ditched him for coffee- I promise it’s not personal, Nick!) and decided to go for the ultra after all.  Then the sky decided to showcase its awesomeness and there was one of the most incredible sunsets I’ve ever seen which, coupled with David Bowie, made the last couple of laps feel like a sort of religious experience.  Amazing!!

As anyone who’s ever seen my Instagram page (@ultrarunning.geek) will know, I’m a bit obsessed with taking pictures of the sky and nature but this was seriously incredible.  It made the freezing start and icy wind absolutely worth it and I almost didn’t want to stop by the end even though I was physically exhausted and emotionally drained.  There’s something magical about running when the light’s an intense gold and the world seems strangely magnified and detailed, and that’s the point when I start feeling fully connected with the world around me and with God.  Took way too many photos so here are a few more!

I was absolutely exhausted by the time I got back to the B+B and after porridge, coffee and a hot shower (because my body felt like I’d spent the day in a walk-in freezer!), I was ready to go to bed at about 7pm!  I forced myself to stay awake for a few hours though, did some drawing and wrote in my diary (because I really am a throwback 90s kid!) and went to bed finally about 11pm in the hope that I might actually get some sleep.  As usual for the moment, I couldn’t get to sleep and had several fights with the duvet in an attempt to get warm (even with hot water bottles and blankets!) and it seemed like ages of listening to Harry Potter to actually fall asleep but I must have done because next thing I remember it was 3am and I was awake again.

The second day was much harder than the first.  I was physically tired even after three cups of coffee and achy from the day before, and I’d started to get a cold which didn’t help (apart from the amusement of being IDd for Lemsip!).  My mood was also pretty rubbish for no particular reason and I kind of wanted to crash and hide in Homeland DVDs for the whole day but obviously that wasn’t an option.  So I used my usual strategy of using Instagram for accountability and asked via a second insta poll if I should aim for marathon or ultra.  THANKFULLY the vote was ‘marathon’ at 57% to 43% so I set that as my target and it gave me a legitimate reason not to push for an ultra. 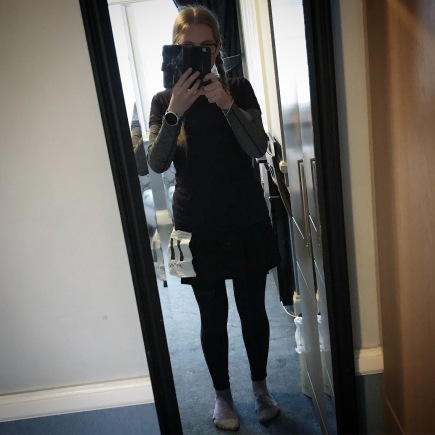 Sunday wasn’t quite as cold as Saturday and I didn’t have to start in a ski jacket and two pairs of gloves which was a relief!  The course was also nicer- it was a 4.3 mile loop with undulating footpath and trail which was really good to run on and again, you couldn’t really get lost.  So on one level I was enjoying the run much more than I had the previous day but I was also physically exhausted, still cold and irrationally anxious which made it really hard to settle into the running.

Then the weather decided to make things even harder with icy rain and wind.  I had a waterproof with a hood and several layers but it was that horrible smeary rain which seems to penetrate through every layer you have so it was pretty much cold and wet whatever you did.  I was literally shivering as I was running which wasn’t fun and I’d also started to feel a bit dizzy and nauseous with tiredness which I tried unsuccessfully to combat with chocolate and Haribo- you know the run’s not going great when Haribo doesn’t work!!

One of the things that really does help when you’re feeling rubbish when running is supportive texts because it makes you feel more connected and like you’re not totally on your own running in the middle of nowhere, and thank you so so much to everyone who sent messages.  I was ready to quit at halfway again but I’d got some lovely messages from close friends and really wanted to get to at least marathon so carried on with the help of lovely friends and family.  Thank you!!

I didn’t take many photos on the second day, partly because I was exhausted and partly because it was so cold and wet that I didn’t want to take my gloves off to take a photo.  But I did get a few good ones in between rain showers and it really was a typical, damp autumn run in beautiful scenery. 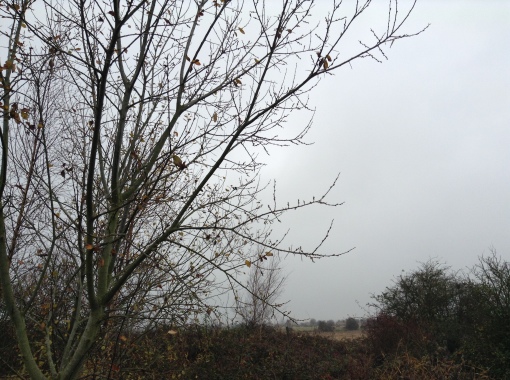 By the end, I was so tired that I could hardly run straight and shivery cold, and I just wanted to finish.  The last part of the lap was a bit hilly and I could really feel it in my knees as I tried to complete in under the time limit, and the last stretch seemed to last forever.  But finally it was over and, being a Lucky Dip Challenge, there was a choice of random medals.  I didn’t really have much of a preference and couldn’t decide, and then one of the race organisers asked me if I wanted a Formula One medal!!  I’m a MASSIVE F1 fan and said yes if there was one, and she said that she’d saved me one because she knew I liked F1!  It was so so nice of her and I got a bit over-excited, acting like a ten year old on Christmas Day, jumping up and down and showing random people (ridiculous post-run emotions even for me!) then I suddenly wanted to cry.  I was still absolutely freezing which might also have contributed to the over-emotion so I went into the visitor centre and got out my blanket, hot water bottle and hand warmers which were an absolute godsend! 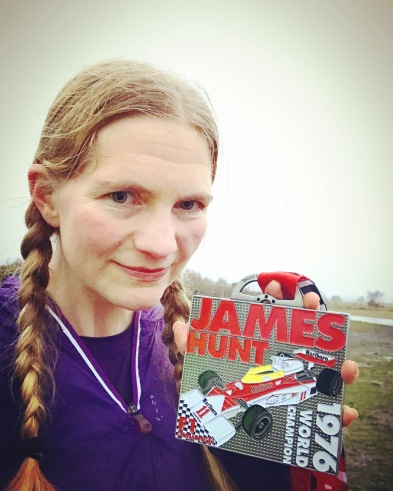 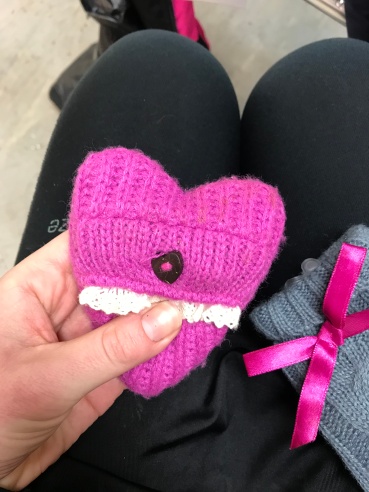 Once I’d warmed up a bit, I could drive home and after nearly 5 hours of driving (M25 traffic then accident on M40), I was ready to crash out.  I had a quick shower and some porridge (with blueberries, thanks to a friend’s suggestion) then went straight to bed.  Amazingly I actually fell asleep relatively quickly but that meant that I woke up ridiculously early so you can’t really win…  So worth it though!!  Was awesome to see so many people I knew and to catch up with people, and can’t wait to see you all at another SVN event soon!