I’m so sorry I haven’t written in so long; I took the blog offline for a while because I got a bit paranoid about people reading it and became completely convinced people I knew were reading it even though I hadn’t shared it with them.  I’ve since changed the domain name and *hopefully* if anyone was, then they won’t be able to find it now but I don’t know how they would have found it anyway and tbh, it was probably just me being over-paranoid anyway!

SO…back to blogging.  I’ve really missed it; it’s one of the only ways I can try to actually make sense of my brain in a way that other people can understand and maybe relate to, and I miss that connection.  Which is especially true now we’re in the middle of social distancing and self isolation!  It’s a weird and disconcerting time for everyone and I’m swinging between being kind of relieved that for once it’s not just me feeling lonely, anxious and guilty all the time but then feeling really guilty for thinking that and just generally overwhelmed by the whole situation- again, like most of the world!

It’s weird that in one sense, not much has really changed- I was signed off work for two weeks before lockdown started anyway and it’s not like I had a particularly active social life (or even one at all).  But I had school and it was the hope of going back to school that had kept me going while I was signed off, and the idea of schools closing before I could go back felt really horrible and disorientating.  I know that a massive proportion of the country are feeling similar with schools closed and exams cancelled, teachers are feeling disorientated and kids are stuck without the structure of school, and for many Year 11s and Year 13s, they didn’t even get a chance to ‘leave’ school properly.  So in the context of that, how I’m feeling really doesn’t even compare to how a lot of people will be feeling at the moment but for me, it was the loss of hope and possibility of structure, purpose and social contact that really got to me the most.  And it’s still so, so hard to deal with.  I’ve set up a website of fun activities, quizzes and puzzles for kids off school to try to keep them entertained and I’m updating it every day but it still doesn’t feel ‘real’ or like there’s any actual point to it.  Trying to focus on it as a distraction and purpose but it’s hard when I don’t know if any kids are actually using it!  It’s Purple Jedi Activities if anyone’s interested 🙂

It’s hard to work out what’s going on at the moment because before coronavirus took over the news and lockdown started, I was already having issues with medication, mood swings, anxiety and paranoia and the current situation really hasn’t helped.  It’s been going on for months- I started to feel rubbish again just before Christmas and it got progressively worse up till February when I kind of hit a massive low and just felt horrible, guilty and lonely all the time but so much that it hurt.  I had a couple of overdose attempts (which I’m rubbish at anyway- both times I panicked afterwards, tried to throw up, felt ill later and went to A+E) and have been having a lot of issues with mental health services recently because I “make people anxious” and it’s a “barrier to treatment” but I honestly don’t mean to and it’s making me feel so shit and trapped.  Long story; I ended up increasing medication to the point when I felt genuinely stoned and spun out all the time which wasn’t safe, was signed off work and have been trying to get the right balance of medication since then.  Currently on a mix of vortioxetine, quetiapine, pregabalin, lorazepam and zopiclone and trying to find the right amounts of each one so that I’m not too hyped, panicky or suicidal but can also function relatively OK day-to-day.  Really tough!!

I think even without the Covid-19 situation, I’d be a bit all over the place atm but now it’s like the world has honestly gone nuts.  And for once it’s not just me!  It’s crazy to realise it’s a global issue and that the majority of the world is feeling scared, overwhelmed and anxious atm which is weirdly reassuring as well as a bit scary in itself.  For me, the hardest parts are the lack of structure which leads to feeling chaotic, ‘vertigo-y’ and like there’s no point, and the isolation which leads to intense loneliness and feeling cut off from everything.

One of the things I really struggle with is the idea that people will totally forget I exist if they don’t see me, and it’s so so hard not to keep contacting people I care about all the time to check.  And it’s SO BLOODY LONELY isolating on your own and not knowing when you can see a real person again.  I’m not a physical contact-type person but right now, I could really, really use a hug and I need it so much it actually hurts- my whole body is physically aching and tingling with anxiety and loneliness. And that must be a million times harder for people who are used to physical affection!

I realised recently that one of the main criteria for diagnosis of BPD is ‘fear of abandonment’ and being isolated on your own feeds into it- it really does feel like you’ve been abandoned by everyone and everything and I’m having to keep reminding myself that it’s a global situation and not just ‘me’- support groups stopped because they had to with social isolation not because they didn’t want me in the group, I’m not on the school rota v often because they’re limiting staff in school not because they don’t want me in, people aren’t messaging back because they’re overwhelmed and scared like everyone atm or busy with other things not because they hate me, social distancing was not introduced because I’m too intense and people need a break from me! I know it sounds over-dramatic, self-centred and ridiculous (which it is) and I know that rationally but it feeds into the main idea that people just don’t want you around which still really hurts and makes you feel rubbish.

One of the other criteria for BPD is ‘chronic feelings of emptiness’ which I’ve always referred to as ‘vertigo’ and it’s so, so intense at the moment without any real purpose or connection.  For me, that’s the part that leads to pretty much constant suicidal thoughts because there really is no point and I’m so scared people I’m close to will forget about me, and it’s so hard to manage.  But I can’t act on any of it atm anyway because I don’t want to put any extra pressure on the NHS by having to go to A+E so feeling really trapped and rubbish.  Which I’m trying to channel into more positive distraction but is leading to a lot of negative behaviours which I hate but tbh if it means I’m not overdosing or ending up in A+E then it’s not the end of the world.

The other overwhelming feeling atm is guilt.  Which tbh isn’t just atm- I feel guilty A LOT of the time anyway but it’s constant now and literally taking over most other feelings.  Part of it is justified- I know I can be too intense and needy and although I really try to manage it and not keep contacting people, I am still ‘too much’ when I talk to people because I honestly am feeling so horrible so much of the time and it’s hard not to let that show.  But I keep apologising and trying to let people have the choice if they let me contact them or not, but I still feel shit for being like this in the first place.  I really am trying to change it- I’m doing a lot of online courses in Food and Nutrition, Health and Social Care and some self-help courses for BPD which challenge viewpoints and behaviours but it seems to be taking a really long time to see any change at all which is frustrating and I just wanted to be a nicer, less draining person.  But at least one positive to social distancing is that people don’t have to put up with me in person any more!

One of the other issues I’m finding hard (and links to guilt) is feeling like everything is my fault.  This is something I’m challenging a lot atm- I know rationally that I am not all-powerful and I definitely didn’t start coronavirus or create the crisis that the world is in at the moment, but I still feel really, really guilty that people are dying all over the world and it feels like I should be doing more to stop it.  I’ve signed up for NHS volunteers and for social care volunteering but haven’t heard back yet, and I’m aware I’m a drain on NHS resources even without Covid-19 pressure which makes me feel really guilty.  I’ve been in touch with CMHT, ED services and the crisis team a lot over the last few weeks because I genuinely don’t feel safe in the house on my own, partly because of intense suicidal thoughts pretty much every night, partly because of medications making me feel stoned or spun out and partly because I’m still getting occasional extreme mood swings which can make me really impulsive.  But they can’t do much atm- they’re not admitting any new inpatients because of the pandemic and all they can really suggest is to keep a mood diary, have a crisis plan and take lorazepam which I’m doing but it still doesn’t feel safe a lot of the time.  But I’m still trying!!

The last issue I’m going to talk about here is the idea of feeling chaotic, out of control and scared which for me, is a big trigger for eating disordered behaviour which I’m trying SO HARD not to fall back into atm.  It’s taken 20 years and some v direct honesty from a couple of friends to get into a ‘healthy’ eating routine and I really, really don’t want to lose that.  So I’ve literally made a timetable to structure the day around a ‘school day’ with set mealtimes which I have to stick to.  And it feels so much safer because it’s not my ‘choice’ and apart from a couple of really horrible, chaotic days, I’ve pretty much managed to stick to it.  Will share it here in case anyone else finds it useful 🙂 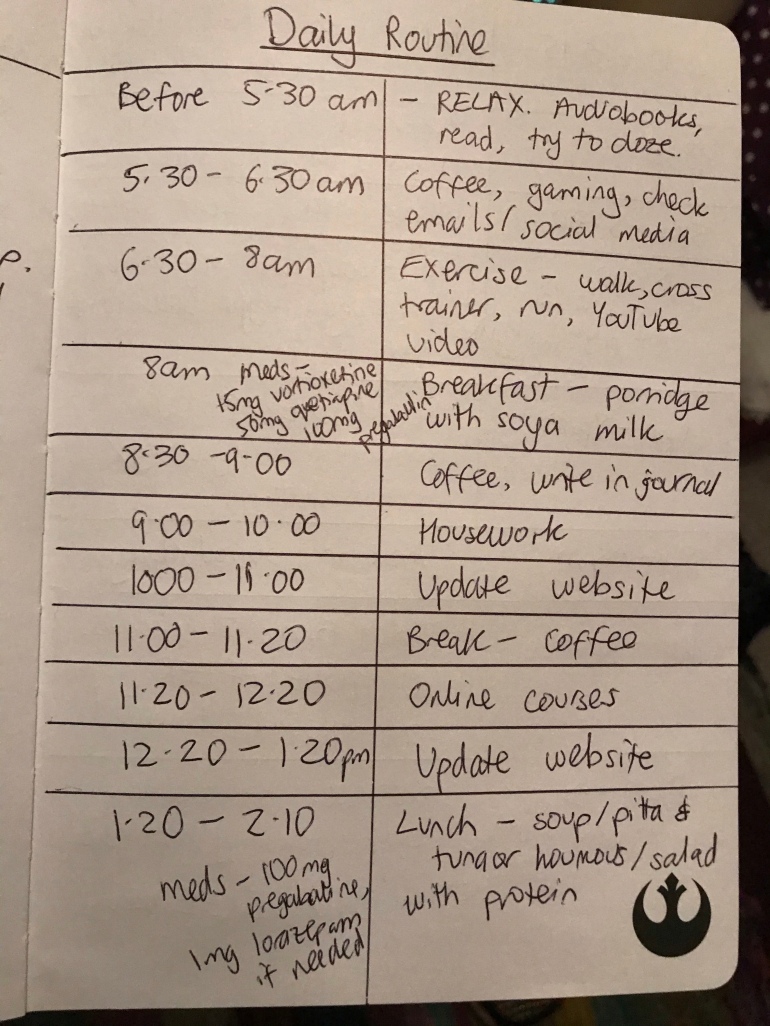 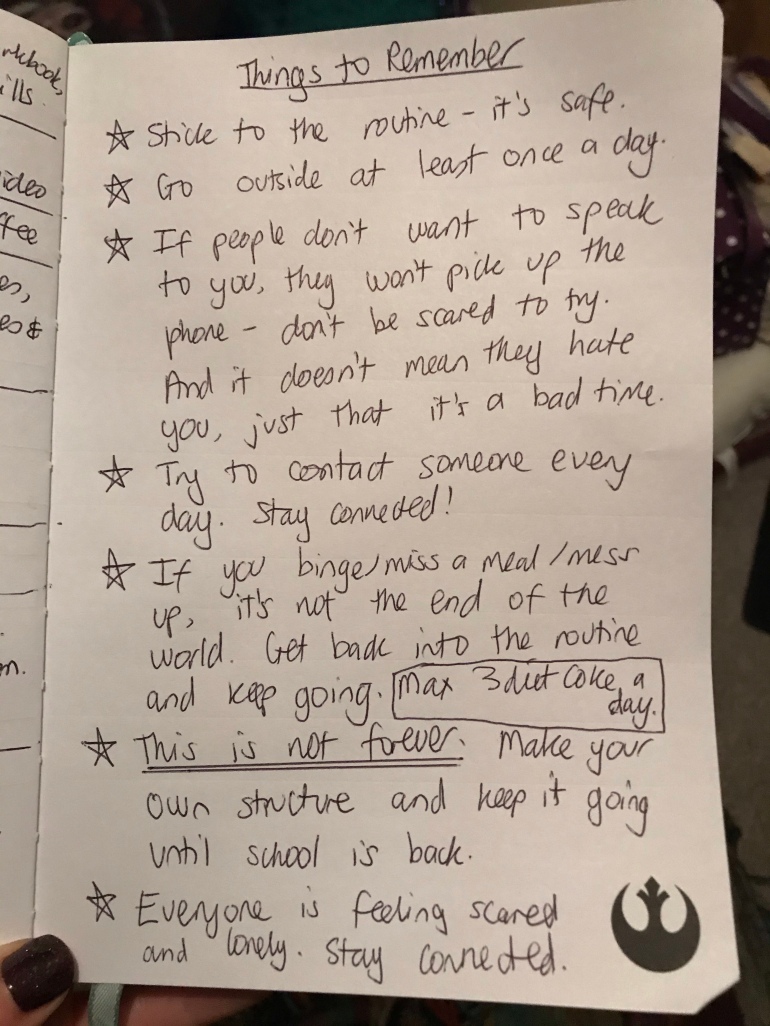 But even though the world is chaos and scary, there have weirdly been some positive effects!  Which I’m trying to focus on and see as proof that things can change…

Anyway, this post is a lot longer than I’d intended so will leave it here 🙂 REALLY hope everyone is managing OK and sending lots of hugs to anyone else self isolating on their own.  It really is hard and can feel like it’s never going to end but IT WILL and reach out to as many people as you can ❤